In many low income and marginalised communities, healthcare services were poor even before the Covid-19 pandemic, leaving people exposed and vulnerable to its effects.

In the Masaai area of Kenya, for instance, Rose Wamalwa of Women Climate Centers International described the community’s pre-pandemic health facilities as “obsolete and dysfunctional. Stocks of medicines are insufficient, and the overall health infrastructure is in a ‘despicable condition’”.

In Rafiq Nagar, an informal settlement of Mumbai, India, “Nobody outside the community, whether it’s the police, doctors or [city government] officers, dares to come inside this area”, reported Shamimbanu Salim Sheikh. “They are scared that they will get infected and diagnosed with various diseases if they enter this slum” because it is an area that is used a dumping ground. As a result, no official ventured in to educate the residents about Covid-19 and how to avoid it. 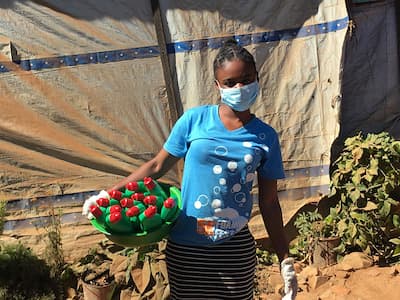 Voluntary health education and distribution of hygiene supplies. Women’s groups and youth groups have played leading roles as volunteers to educate their communities on hygiene protocols. The first challenge has been lack of information or disinterest in public health information.

For example, in the Masaai area of Kenya, where community members have ”focused on educating each other on hygiene measures” they “quickly realised that they have to take their own initiatives to protect themselves from the virus”, Rose Wamalwa recalled.

Meanwhile, in Siaya, Kenya, a group of women were crestfallen to see the lack of interest in hygiene protocols in their broader community. “As the pandemic continued to ravage in the country, the rural communities, especially along the shores of Lake Victoria continued behaving as normal. They wore face masks on the chin and did not keep social distance and proper hygiene. This bothered the team because they were of one accord to help their communities”, says Isabella [no last name given] of Siaya. Seeing people’s indifference, this group of women decided to take it upon themselves to educate the community, especially the elderly and other vulnerable groups such as disabled people. As community health workers, they went from door to door and held courtyard meetings, maintaining all hygiene protocols and describing how to wear masks, wash hands properly and maintain social distance.

In Hatcliff Settlement in Harare, Zimbabwe – an informal settlement – young people in the community asked relevant government ministries for further training so they could disseminate public health information more accurately. “We are requesting outreach programmes on Covid-19 issues, as we don’t have enough information. If the virus spreads in this community, we will struggle to survive because we are not practising social distancing. More youth can be engaged to disseminate vital information,” says Phillip Matamande, a member of the community.

Women’s health and menstrual hygiene was also of concern to communities and formed the focus for consolidated local efforts. For instance, a women’s group in Satkhira, Bangladesh responded to women’s and girls’ need for menstrual hygiene products by making their own sanitary napkins and distributing them at little or no cost in the communities.

Countering misinformation. Countering actual misinformation that is harmful to personal and public health has been the second challenge. In the drylands of Kenya, rumours were rife that “because Africans are strong and live in warmer climates, they will not be infected by Covid-19,” said Rose Ngoilelo Orguba of FEIYAH Action Network (FAN) – a community-based organisation that works on women and girls’ rights in pastoralist Rendille and Samburu, Kenya. Some of the more outrageous rumours included that Covid-19 is a disease only suffered in cities or that the cure is a locally-brewed whisky. FAN used a radio station to counter this misinformation in the communities. “We have used case studies from other parts of the world to tackle the widespread rumours,” Ms Orguba explained. Apart from case studies, indigenous songs sung by women, which are shared on WhatsApp, have also been helpful to abate these rumours.

Meanwhile, in Nepal, an NGO run by young people called Accountability Lab Nepal realised that ‘fake news’ about Covid-19 was becoming rife, following the disease’s outbreak. They were battling rumours, such as the one that drinking turmeric water and washing hands in warm water would cure people of the virus. Furthermore, Accountability Lab’s members became concerned that pregnant women were not receiving adequate care due to the pandemic. Fortunately, the organisation already had valuable experience and networks in place – as they had faced the challenge of fake news before. “Five years ago, Nepal was rocked by a series of massive earthquakes that killed nearly 9,000 people,” reported Suresh Chandis and Bikin Ghimire for Voices from the Frontline.

As dangerous as the earthquakes themselves were, the misinformation that followed created even more havoc. At that time, Accountability Lab mobilised its huge network of volunteers across the affected districts to track rumours, concerns, and feedback from the community members and it spread accurate, validated information in communities to tackle the myths. This experience helped the Lab leverage its past learnings to deal with misinformation during the ongoing pandemic.

Enabling actions to support and work with community solutions